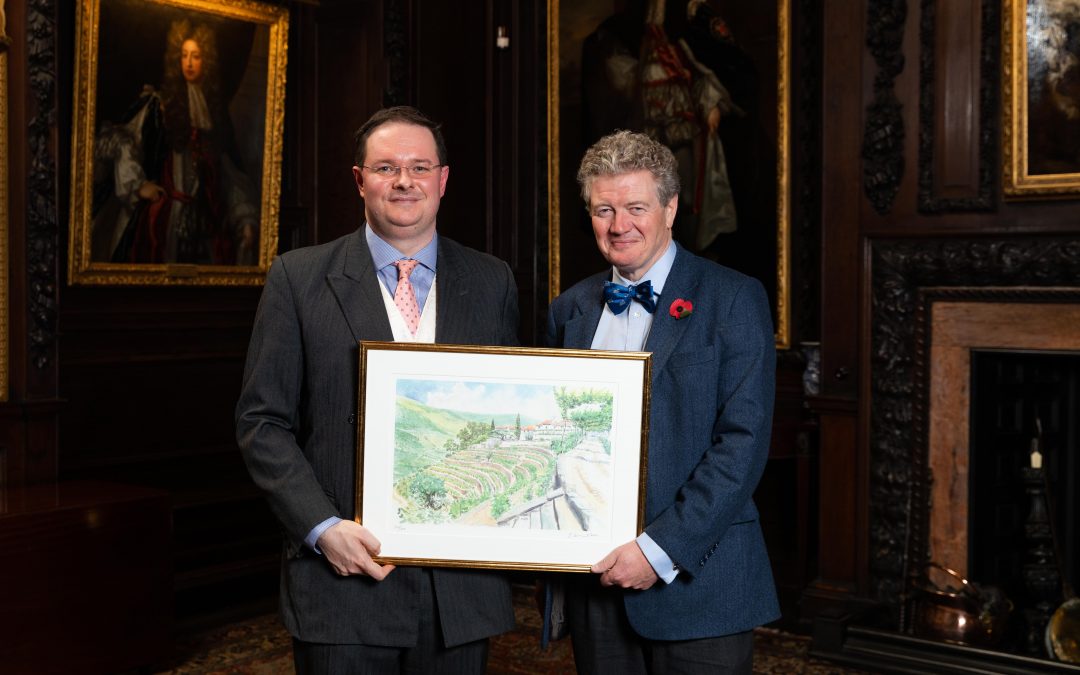 Edward Ragg MW has won the prestigious 2019 Quinta do Noval Award for the best research paper (RP) at the Institute of Masters of Wine annual awards ceremony.

Edward’s RP entitled Portfolio Management Strategies of Major Chinese Importers was judged the best RP in the final stage of becoming a Master of Wine. He wins a cheque for £1000, a framed print of Quinta do Noval, and a trip to the iconic property in the Douro to collect a case of wines and ports – including Noval’s fabled Nacional Vintage.

Edward received his award from Christian Seely, Managing Director of AXA Millesimes, Noval’s owners, at the recent ceremony at Vintners’ Hall in London, which honoured the fourteen new Masters of Wine who had passed the 2019 Master of Wine examinations. They join a select group of fewer than 390 MWs in 30 different countries worldwide. Edward becomes the fourth Master of Wine to be based in China.

Commenting on Edward’s prizewinning paper, Christian Seely said: “This provides a very detailed and thorough analysis of China’s notoriously opaque wine market, through the evolution of the portfolios of the main wine importers during the period 2008-2018. The method was extraordinarily thorough, and the conclusions drawn clear and insightful, demonstrating exceptional analytical skills.

Having lived through the period in question as a wine exporter to China, I was extremely impressed by the writer’s ability to shed light on the evolution of this complex market. I found the paper fascinating, authoritative and extremely useful. Bravo!”

Author, poet and former coach and captain of the successful Cambridge University blind tasting team, Edward Ragg is a well-known wine authority in Asia. In 2007 he co-founded Dragon Phoenix Wine Consulting in Beijing with his wife Fongyee – also an MW – and for ten years was a Professor at Tsinghua University (2007 – 2017). He and Fongyee are the authorised tutors of the WSET Diploma in mainland China, and Edward is also a respected wine judge in China and Australia.

“I am delighted to have won this year’s Quinta do Noval Award” he says. “I have been familiar with Quinta do Noval and its historical significance within the Port trade for many years, especially having first tasted a vintage of Nacional as a student in the UK in the 1990s. Based in China, I’ve watched with interest the development of premium Port in various international markets. As my MW research paper was concerned with the Chinese import sector, I sincerely hope that Noval and other premium Port producers will lead the way in China and the rest of Asia as new lovers of Port emerge.”