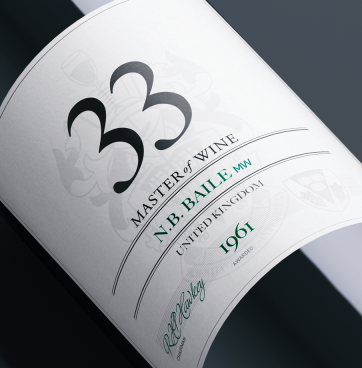 Nick Baile MW died on Wednesday 9 October 2013. He co-owned and ran Oddbins, the UK off-licence chain, for over a decade in the 1970s and ‘80s. Oddbins reputation as an eccentric, buccaneering business with fine wine bargains and great design (the fruit of Nick’s beloved art department) was largely down to him.

Nick Baile MW was born in Chelsea in June 1932, and grew up in Lincolnshire. He was educated at Blackfriars School, Laxton, and went on to his father’s old college at Oxford in 1950 prior to National Service. Having spent over a year as a subaltern in the Nigerian Army, he started in the cellars at Unwins in 1955. In 1959 he joined Harvey’s of Bristol, and became the 33rd Master of Wine in 1961.

His first foray into starting his own business began in 1971 when he opened two shops, in Islington and Holborn, but he is most famous for buying Oddbins out of receivership in 1973.

“My Father and Denis Ing sold Oddbins to Seagrams in 1984. There were many reasons for doing this and it was a more complex storey than is often reported in the press. What was very apparent was that he really did not want to, as Oddbins had become his life.

Not only was Oddbins an iconic business which blazed a trail of new discovery, bringing wine never seen before to the average person on the street; it was also, for a time, a very successful business. They broke barriers with the idea of self service in a wine shop, computerisation in stock control, as well as giving many of today’s top brand names their first real break in the UK.

With exponential growth over a 10 year period, they succeeded in growing a business with sales of £27 million (ex vat) with just £20,000 capital. It became a brand with enormous recognition and employed many people in the trade around the world.

Oddbins was a very gregarious company and by 1984 it was employing nearly 400 people. He knew pretty much all of them, and took a keen interest in everyone. Home was often full of various employees, usually with a drink in hand, and despite the company’s size, it was very much a family business.

After his time in Oddbins he bought back the three Paris shops from Seagrams and ran the John Barnett chain. These years after Oddbins were devoted to trying to recreate what he had managed with Oddbins…probably an impossible task….. but a noble cause nonetheless.”

On behalf of the Institute we offer sincere condolences to Nick’s family and friends. He is survived by his four children (Alexandra, James, Charlotte, and Simon), and by eight grandchildren.