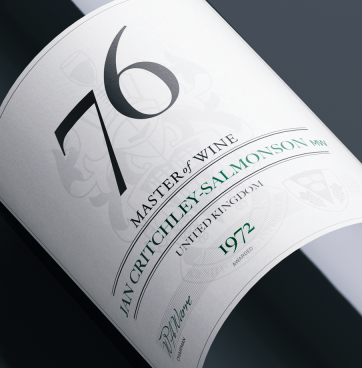 Jan died on Thursday 26th February 2009 at the Musgrove Park Hospital, Taunton, after a courageous battle with Lung Fibrosis and is survived by Jenny his wife of over 40 years and two daughters, Anne-Marie and Katherine as well as three grandchildren, Thomas, Isabella and Georgiana.

He had moved to Somerset in 2004 to his dream house, which has a big garden and also a cider orchard where he was so looking forward to making and enjoying the cider!  But his life was cut  short and he was unable to fulfill his dream.

John Cunynghame, Managing Director of Hallgarten Druitt comments: “Jan was one of the great characters of the U.K. wine trade and his death will be felt by all.  He fought his illness with great fortitude and continued to work full-time while doctors sought the best form of treatment for him.  He was in good heart during our recent annual tasting at Claridge’s and was looking forward to hosting a prestigious tasting in Edinburgh for his Scottish customers.  He will be greatly missed.”

Born on 24th May 1946 he entered the wine trade in 1965 with John Harvey & Sons of Bristol, following a period working in vineyards in France.  He became a Master of Wine in 1972, and at that time was the youngest pass ever.  In 1973 he moved to IDV and worked as their European Sales Manager based at Chateau Loudenne in the Medoc, and was promoted to International Sales Manager in 1978.

He then returned to the U.K. in 1981 and founded Seymour Ramsay Ltd, a wholesaling and importing company who were agents for a number of overseas wine companies, and shortly after in 1986 he joined John E Fells & Sons as Wine Director.  Two years or so later he moved to Hallgarten, and when they acquired Averys of Bristol he became their Agency Sales Manager.  He was a member of L’Ordre des Coteaux de Champagne.

Jan was a very generous hearted man who always had time to help other people, particularly in the context of wine studies and tasting.  Personally he mentored me in tasting of classic areas with emphasis on Bordeaux which you may know was his real passion, following his having worked at Chateau Loudenne for several years, and we visited Bordeaux together on many occasions.

He was devoted to his wife, two daughters and grandchildren and was looking forward to spending more time with them, which made his premature death particularly poignant.  Jenny and he had also comparatively recently bought a lovely house in Somerset with a huge garden (something on which both Jan and Jenny were passionate) together with a large orchard of some 90 apple trees from which Jan was keen to develop his cider making skills.  In short he had time for everyone, was passionate about everything – whether work or his family and he is sorely missed by us all.

I worked with Jan from about 1989 to 1993 when we set up the agency division of Avery’s of Bristol and before he had been working at Ch Loudenne with IDV.  He returned to the UK to start his own business Seymour Ramsey which, after a short time he was unfortunately forced to abandon for health reasons.  After that he went to Fells and then Hallgarten’s Avery subsidiary where he remained until his untimely death.

He was a very keen cricketer and good with the bat as a young man but in his latter years I think it is fair to say he talked a better game than he played!  His great achievement of course was to be the youngest MW pass ever at 26 and this record stood for many years.  Jan was a man of great charm and a mean sense of humour who could talk the hind legs off a donkey give half a chance.  I enjoyed working with him and kept him as a valued friend for the rest of his life.