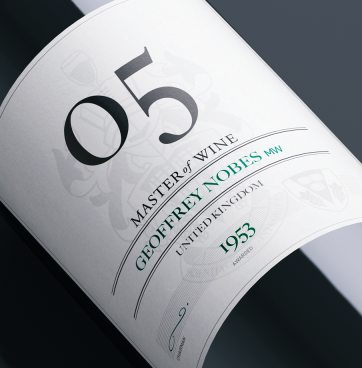 Geoffrey was an employee of Taylor Walker Brewery, in London. He was an appreciated Secretary of the Founders Group and later of the IMW. A very precise man, enthusiastic in his role at Founders and the IMW. He was a member of the London Study Group where he tasted and exchanged knowledge with his peers, and of the 21 who sat the Group’s first examination, was one of the few successful.

Geoffrey was one of the very first Ms W and when I first met him he was working for the Grants group with the Dennis brothers, Leonard and Stanley. Leonard was the thrusting member of the triumvirate; Stanley the ‘production’ guru and Geoffrey the sales chap. His forte was charm and attention to detail, especially in what is now called “human resources and relationships”. As our US partner Peter Max Sichel observed about this trait generally “‘he killed his customers with kindness”’.

I got to know him via the Institute, and especially on a couple of MW foreign trips when he got me to be his batman. I used to do his shoelaces up, as he had a duff foot which caused him some discomfort and he simply couldn’t reach to lace up his shoes. Slip ons for him weren’t an option.

I no longer recall exactly when Geoffrey came into the Sichel orbit, but it was when Walter Sichel began to worry that we as a team were getting younger whereas he was getting older! I think Walter felt it would be helpful to take on someone fairly mature to even things out a bit. I had bumped into Geoffrey several times and he had really reached the end of the road with Grants. He was fed-up with the big company politics and wanted a role in a benign environment where wine was really important. He didn’t want a directorship, simply a position that would use his experience and knowledge of the trade. He came along for lunch with Walter and me. It all went well and we took him on really as a senior salesman and great “door-opener.” There were lots of potential clients where Sichel wines needed to be but lacked adequate personal connection and pull, but where Geoffrey had a ready entree. It was a mutually successful arrangement.

Unfortunately he started to have bouts of ill-health and on one awful occasion he drove home sitting in a pool of blood. This caused him to rethink his life and in mid 1976 he was about to become Chairman of the Institute, but did not feel up to the task and was unfortunately obliged to pull out. He never quite got over his health problems and his role in Sichel became more and more peripheral, but we were thankfully a kindly and supportive crowd and he was glad to be out of the rat race.

Geoffrey was a smashing bloke, a great supporter of the younger sales team members, a great colleague and a very nice man. At Sichels, we did not socialise a great deal outside the office so I know little of his home of family life. I don’t know the cause of his foot problem, whether it was there from birth or something that happened along the way, but I can say that although short in stature he was extremely strong and muscular. If he fell over, he was a ton weight to pick up. His wine knowledge was deep, but this was not a major factor in his relationship with Sichels, who had a very good team of first-class technicians, and Geoffrey really hardly got involved in the wet end of the business. He was not bothered by this. I, and all his colleagues liked him a lot. He performed an excellent job for Sichel, and I’m just glad that he found a congenial niche in which to spend the autumnal days of his wine trade career.