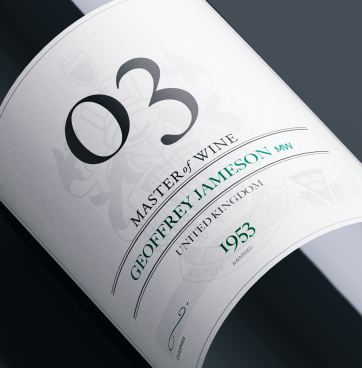 Geoffrey worked at City Wine Merchants. The principal, his father, Col. Jameson, was a Vintner and a past Master of the Vintners’ Company. Geoffrey was a tall regal person, always formal and correct but very approachable. He was a founder and trustee of the IMW with Vincent Larvan. He was a member of the London Study Group where he tasted and exchanged knowledge with his peers, and of the 21 who sat the Group’s first examination, was one of the few successful.

Obituary published by The Times, 3 April 1996

Geoffrey Jameson was a knowledgeable and convivial pillar of the post-war wine trade in London.  After a thorough apprenticeship with his father, he went on to forge his own career at Justerini & Brooks, that fine, bow windowed Regency shop in St James’s Street, which has supplied wine buffs in the area, as well as the Royal Yacht Britannia, for many years.

Jameson was well suited by both his extrovert temperament and birth for his profession, being the grandson of the managing director of Jameson’s distillery in Dublin.  At Eton he was a member of POP, and an outstanding sportsman standing at 6ft 4in.  He made a formidable presence on the cricket field.

When war was declared in 1939 he joined the 60th Rifles.  The Greenjackets saw more than their share of action at Alamein.  Their medical officer, Keith Badgett suffered severe leg wounds and was carried by Jameson across the battlefield to a jeep, where Jameson administered morphine.  Jameson bravely made his way back to the thick of the fighting, but an hour later was shot to pieces, and so badly wounded that the stretcher bearers thought he stood no chance of surviving.

Jameson was admitted to hospital in Alexandria, but his wounds were considered too severe to be dealt with there, and he was moved across the continent to Durban.  His first recollection of Durban Hospital was waking, much to his pleasure, to find Keith Badgett in the next bed.

Invalided out of the Army, Jameson returned to England at the end of 1943 and began preparing for his career in wine.  His father was well established as a private wine merchant, and Jameson joined his father’s firm of K E Jameson, who had then a flourishing business dealing with clubs, military and naval messes and City livery companies.

All prices were at the time fixed by Retail Price Maintenance which meant that undercutting was not allowed.  Geoffrey Jameson developed an intelligent way of getting round this.  He set up wine clubs for solicitors and regiments, members of which could buy at advantageous prices.  While this was perfectly legal, it did not make Jameson particularly popular with the Wine and Spirit Association which was trying to prop up a united, but ultimately losing front on this issue.

In 1953, when the Vintners Company and Wine and Spirit Association jointly established the Master of Wine examination, Jameson and five others passed at the first attempt.  As membership increased an Institute of Masters of Wine was formed and Jameson was its Chairman in 1971.

In 1963, he left K E Jameson to take up an appointment with Justerini & Brooks, joining their shop in New Bond Street. Jameson became Managing director in 1978, the year he set up the shop’s new premises at 61 St James’s Street.  He ran the day to day business of the shop, until he retired in 1985.

He was known as the “gentle giant” in the office, and gave many excellent lunches there, at the end of which guessing the shipper and vintage of the port for a fee raised substantial sums for wine trade charities.  He also instigated a further competition which consisted of putting over a golf course laid out from the dining room down the stairs to his office for guests to enjoy on the way out.

Jameson looked after his team well, and this was obvious when he was put in to bat to negotiate the annual wage increase.  His love of the turf spread throughout the office, and, although a disastrous tipster, he stirred great interest among his colleagues for National race meetings.  He invariably won the sweepstake.

Despite a degree of immobility because of his war wounds, Jameson was an active member of the wine trade.  He was Clerk to the Royal Cellars from 1964 to 1979, responsible for procuring wines for selection by the wine committee and for maintaining stocks in all the royal households, including the yacht Britannia.  For this he was appointed a CVO in 1979.

He had been a liveryman of the Vintners Company since 1943, joining the court in 1974 and becoming Master in 1981-82.  For many years he was a member of the wine committee of Boodles.  He was also involved in many of the wine trade charities, particularly the Tim Derouet Memorial Foundation, which had been set up in memory of a friend in the trade.  This enabled a newly qualified Master of Wine to receive a scholarship to visit a wine producing country of his or her choice and to increase their experience.

Jameson kept up his cricket and his golf for as long as he was able.  But for the last two years of his life he was confined to bed after an accident in which he was dragged by his dog Texas over the bonnet of a car and across a road.  Texas was forgiven, and became a faithful companion thereafter at Jameson’s bedside.

His wife Margaret, younger daughter of the 1st Lord Killearn, died in 1993, and he is survived by his son.