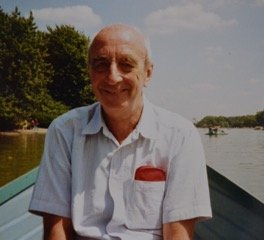 George Dowglass MW was born on 25 September 1924 in Chefoo, China, one of the British Treaty Ports. His parents had travelled to China independently, and met and married there. His father was an architect, and his mother had gone out as secretary to a missionary society, going overland on the trans-Siberian railway, having decided that life in Llandudno, Wales, was too dull to be borne.

George spent time in the Indian army ending up on the North West Frontier and after Partition was offered the chance to join the Pakistani Army, but decided its future was too uncertain and returned to Britain.

However Britain in 1946 looked very dull and dismal after India, and despite having a place at Oxford to study Modern Languages, George decided to return to the Far East. He took a job with Guthries, one of the big general trading firms in Singapore, where he recalled weekends spent travelling up country to the rubber plantations during the Malayan Emergency. On arrival at the plantation, each guest would be given several hand grenades for protection if the Communists should strike.

He learned the wine trade working for most of the 1950’s at Smallwoods, a small Wine Merchants in Birmingham. Most wine and spirits were still imported into the UK in cask, and one of his jobs was bottling and labelling it. Locals would also bring jugs and bottles to the firm to be filled with rum. The rum arrived from the West Indies as a white spirit, and caramel was added to give it a golden colour. Woe betide if he did not get the colour dark enough: people complained that the rum was too weak and refused to take it.

In Barbados, George set up his own business, Trident Wines, importing wines and spirits mainly for the growing tourist trade; the locals preferred to drink rum. George built up a flourishing business over the years, which is still going strong today, although he was not a natural salesman. He refused to sell good wine to people who he thought would not appreciate it, suggesting for example that his Burgundian sparkling wine would suit them just as well as his vintage champagne.

In 1996, he and his wife decided to retire to Broadway in the Cotswolds, and made a very happy life there.

George was enormously kind and generous, amusing and an incredible source of knowledge, and he will be much missed by his friends and family.