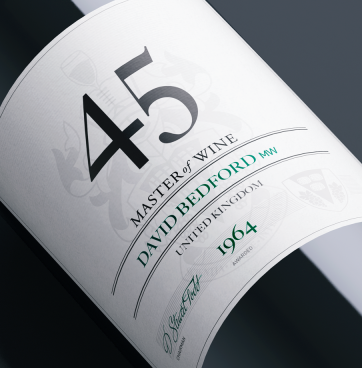 A good friend. He was Buying Director of Victoria Wine when Colin & I were sourcing wines for the Allied companies, and we worked together regularly.

I’m pretty sure David joined the Allied associated companies straight from the army. He was a fine games player in his youth and starred in a particularly memorable Eton/Winchester cricket match. I thought I knew him well but discovered a whole lot more (including the above) at his Memorial Service at Winchester, which rather underlined his modesty.

David was unmistakable, with a very florid complexion and an infectious laugh. He smoked quite heavily, which Colin Anderson used to complain about when tasting from the same glasses. I always remember him as bluff & cheerful, and as I recall, one of those people who are totally without malice.

David Bedford was a man possessed of a wide variety of talents and interests, as is evidenced by the wide variety of friends who have gathered here today to pay tribute to his memory.

Despite being descended from a long line of Warwickshire parsons, he was brought up in Essex and came here to Winchester where he distinguished himself in the field, playing soccer for the School for two years, captaining the side in 1950 as well as being in the cricket XI for three years.  He was captain of cricket in 1950, opening both the batting and the bowling, and played a significant role in the high-scoring match against Eton. Winchester made 219, with David sharing the opening stand of 83.  Eton replied with 356. The main feature of Winchester’s second innings was Mike Coulman’s brilliant 200 but, in the words of the Wykehamist, this “must never completely overshadow the two really vital innings which the captain played……as much as anyone was the architect of security”. The Eton college Chronicle was even more fulsome in its praise and in its words we see much of the character we were to come to recognise in David. “History will doubtless couple this match with the name of Coulman and it will be a long time before Eton will forget this devastating scourge….but he will not grudge our saying that the real architect of Winchester’s fortune was Bedford. If ever there was a hero of a match, it is Bedford. He opened the Winchester first innings with the duty of laying the foundations on which others could build…in the second innings he had to see that the deficit of 137 was treated with respect but not with fear.  with no considerable equipment as a batsman he met the challenge with courage, patience, good humour and success…what character can do in cricket, Bedford did to the full”.

“Courage, patience, good humour and success”. Could there be a more fitting epitaph for David?

Off the field he became Senior Common Room Prefect which, to those of us who were at the other place, is roughly the equivalent of President of Pop, – not based on academic ability but on general worthiness and all round distinction.

After Winchester David entered Sandhurst, where he was very popular and successful. He captained the XI and, as Senior Under Officer, was a strong contender for the Sword of Honour.  However, an unfortunate encounter with the Adjutant led to his losing his SUO status and with it the top award.

He was commissioned in 1952 and joined the 2nd Battalion 60th Rifles (KRRC) in Munster as a platoon commander. He is remembered as being very popular with the riflemen and contributing to a good atmosphere in the mess. The riflemen knew him as “Ginger” while his fellow officers christened him “Tigger” as he was always so active and bouncy. He captained the Battalion cricket XI which won the BOAR championship in 1954 as well as ski-ing and shooting for the Battalion.

In 1957 David was posted to the 1st Battalion in Derma where he was Company second in command. At this time he met Celia who had come out with a girl friend to stay with her uncle Hugh Hope who was commanding the Battalion. Having no ambition to be a general (“the red cap band would clash with my complexion” he would say) David retired from the Army to join his father’s firm Taylor Walker at the Cannon Brewery in St John St, Clerkenwell.

His first appearance for the Cannon Brewery had been some nine years earlier when, as an 18 year old schoolboy, he was drafted in at number eleven to make up the numbers in a critical brewery cricket match. When the ninth wicket fell, Cannon required 10 runs to win and the batsman at the other end (I shall spare his blushes for I know he is present) was on 90 not out. David, already a star player at Winchester, with no thought of personal glory, blocked every ball enabling his partner to win the match and score a century.

At the Cannon Brewery, David started as the Office Boy earning £2 per week. When he applied for a more permanent job he was interviewed by the Chairman. “I gather you want a job?”. “Yes please Sir”. “Oh well, I suppose it’s better to employ someone we know than one we don’t so go and get me a pink gin from the cupboard over there and if you do it properly I’ll employ you”  “Those were the days of decent interviews!” David recalled.

This began two years of training and he became an Assistant District Manager, dealing with pubs in the East End of London. However, with a father interested in wine and an uncle in the wine trade, it was wine rather than beer that was his real love. Victoria Wine had been owned by Taylor Walker since 1929 and in 1959 both businesses were taken over by Ind Coope. By now married to Celia, and with a promise of a job with Victoria Wine, David had little difficulty in refusing the offer of a job in Uganda. Brian McGrath was MD of Vic Wine and had been asked by David’s father to keep him employed and if possible to prevent him from getting the sack. Brian encouraged David to qualify as a Master of Wine, which he achieved in 1964 much to his own surprise although he was the only one to be surprised.

In the 1970’s, David became Sales Director. Doing business with him was always fun and his contemporaries in the trade remember him as being “jokey but efficient”. He made buying wine easier for the uninitiated by introducing a grading system for white and rose wines under which the driest were given a 1 and the sweetest 9. Red wines were graded from “soft” through “firm”, “light” and “medium” to “big”. The press commented “now choosing wine is as easy as 1,2,3”.

David was very popular throughout the wine trade. He was a member of the Old Codgers Association – a luncheon club for members of the trade – and served as its President for two years before his death. He was always encouraging the young, and what pleasure it must have given him to know that his protégé Patrick McGrath was to be installed as Chairman of the Institute of Masters of Wine.

Much of David’s spare time was devoted to the Woodmen of Arden, the oldest archery society in the country, having been founded in 1785. David was elected in 1952 and, less than two months later, became a Verdurer, winning the royal company of Archers Bowl with the third highest score since the trophy was first presented.  He went on to win the Bowl seven more times and is acknowledged as the finest archer the Woodmen ever had. In 1986, he became the only Woodman to have won all the Society’s 17 honours and represented the Woodmen against the Royal Company of Archers 15 times – more often than any other Woodman. He was much loved and respected by his fellow Woodmen and by the royal company, whose Captain of Shooting has recently written “his zest for life and infectious enthusiasm was an inspiration to all who came in contact with him…..we shall remember him with the greatest affection and value the friendship and enormous enjoyment he gave us all on so many, many occasions”.

David was the fifth generation of his family to be a Woodman and his father, grandfather and great uncle all served as Secretary. David himself became secretary in 1983, holding the office for eighteen years.

He took his archery very seriously but was not averse to a bit of fun. Few who were present will ever forget the time when, at the Grand week Ball at the Forest Hall in Meriden in the 1950’s – a formal white tie occasion – David appeared through a trap door in the dance floor wearing only his socks complete with suspenders and the Warden’s wife’s red and white polka dot bikini.

It was at Meriden in the 1950’s that he first met Cecilia who knew David’s uncle Pip. He also got to know the Aylesfords and the Guernseys and was for many years a conscientious and much loved Trustee of the Packington Estate.

Finally, among David’s many talents were his shooting and fishing.  An enthusiastic but considerate shot “you shot better when you were standing next to him” said someone who has shot with him from the marshes of Lybia to the fields of Surrey. He derived much pleasure from his spaniels, including one (who shall be nameless) who always contrived to go AWOL after the last drive before lunch, depriving her owner of at least one pre-prandial gin and tonic.

David shot with the Southill for forty seasons and was much loved by the keepers, beaters and pickers up. He was one of the very few who took the trouble to visit the keeper during the rearing season and was always interested in the plans for the future of the shoot.

His interest in fishing came relatively late but he took to it as easily as his other accomplishments, enjoying weeks on the Conon and Deveron and catching his last fish only weeks before his death.

So how can we possibly sum up with a man with so many talents, so many interests?

He carried his accomplishments lightly. He was a devoted father and grandfather. He truly cared for others, always putting other people first and will be remembered for his great kindness, his enthusiasm and encouragement to everyone, especially the young.  For his great sense of fun and love of life. For his gentle good manners; and for his old-fashioned values and his charm.

Everybody loved him, which is why all of us here today share with his family a profound sense of loss together with deep gratitude for having known him, not just as a cricketer, a soldier, a Master of Wine, an archer, and a shot, but as a true friend and a true gentleman, the like of whom we do not often see these days.