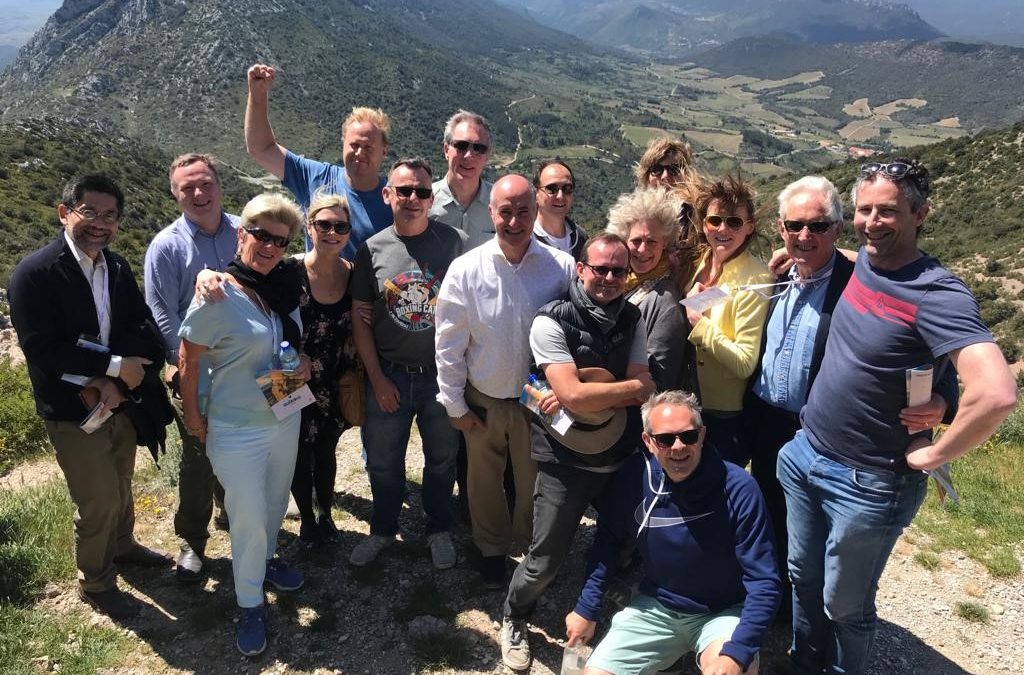 Our group of 15 Masters of Wine gathered in Perpignan for what was to be a truly memorable exploration of the Roussillon region and its wines. We came together from various parts of the world – France, Germany, Ireland, Singapore, USA and UK – with a common interest to learn more about this historic region. Funded and arranged by the Conseil Interprofessionnel des Vins du Roussillon (CIVR), we were accompanied by the experienced and knowledgeable CIVR director Eric Aracil and his assistant Kim Loranger. From the Institute we were ably led by Justin Howard-Sneyd MW and we were also accompanied by Kara Tonitto, IMW Marketing and Communications Officer.

On our first morning, we were introduced to Mr Philippe Bourrier, President of the CIVR, who welcomed us to the region; he noted that Perpignan had been nominated as this years ‘European City of Wine’ (who knew?), so it was a good place for us to be. The region has 25 co-operative wine cellars which account for ~75% of production, the remaining quarter is produced by over 350 growers. Eric then gave a presentation in which he outlined the key aspects of the Roussillon region – including its geography, history, and wine denominations – with great clarity. As a mental visual aid for the week, the image of the region as an amphitheatre – encompassed by a semi-circle of mountains to north, west, and south, and by the Mediterranean coast to the east – was powerful. The mountains were indeed visible throughout our travels – the highest, Mount Canigou at 2785m., retained fresh snow on its peaks – whilst the blue Mediterranean became increasingly present as we progressed. When both snow-capped mountains and the sparking sunlit sea were in view together, to one side and to the other, the effect was quite outstanding. Both Eric and Mr Bourrier assured us that Mount Canigou has a semi-mystical status in local culture, and that for some an ascent to its peak is an annual pilgrimage. The climate of the region is hot, sunny, dry, and inclined to be windy. Eric described the eight, yes eight, different winds with the authority and emotion of one who has counted them all and felt them keenly. Our experience during the four days was not too bad, we were not too blown about and the zephyrs were generally gentle and refreshing.

Concerning the history of the region, Roussillon was a part of the short-lived Kingdom of Majorca in the 12th century. More significantly, we learned of the Catalan nature of the region, and again – like the mountains and the sea – this became a recurring theme during the days that followed. Indeed, these two aspects, of geography and history, are what very obviously distinguishes the Roussillon region from the neighbouring Languedoc, with which it has been historically associated in perhaps rather a casual way. The Catalan flag was often to be seen, with its striped red and yellow colours, and many signs were dual French-Catalan. Having said that, the use of the Catalan language on this side of the national border appears to be in decline. As for the wine denominations, it all seemed pretty simple and straightforward on this first day during Eric’s admirable presentation, but, perhaps inevitably, complexities arose in due course.

The first three days of our visit were spent traversing the inland part of the region. Justin and Eric had put together an outstandingly comprehensive programme of visits to vineyards and wineries. We spent time with small growers and with large co-operatives, and with much in between. Every day included multiple tastings of many wines, and each day included at least one ‘walk-around’ tasting which brought in many winemakers to a central location. As we examined these inland vineyards, usually on slopes, the complex geology of the region soon became apparent. We moved from limestone soils to marls, from schists to gneiss and granites. There were single vineyards whose soil varied in colour from reddish brown to black, often in almost a striped manner, depending on the mineral content. Rock and stone were present everywhere, in both the landscape and the vineyards. This rich minerality and huge variety of soil types within a relatively small region were striking and is one of the magnets that has drawn in enterprising winemakers, looking for a characterful terroir, from outside the region. Indeed, each day we found one or more winemakers at the tastings who had come to the region from elsewhere in France or from abroad, including Australia, South Africa, Switzerland, and UK. Another attraction for winemakers here is the presence of old vines; over half the total vineyard is over 50-years old. The Roussillon is a historic vineyard region, and a large one at that. There is a precious legacy of old vines, a tantalising prize for an ambitious winemaker.

On our fourth and final day we moved down to the coast, to the Cote Vermeille which continues to the border with Spain. Here, there is no less rock and no fewer old vines. What is strikingly different is the possibility of local commercial opportunities. Whilst inland is rather quiet, the coast is a very busy tourist area. Even midweek in May many visitors were around, the weekends and holidays are packed with visitors. Two of the wineries we visited here had a restaurant and retail shop on site; at one they told us that 60% of their wine sales are retail cellar-door and through the restaurant.

There are 23 permitted grape varieties grown in the region. The Grenache in its various forms – Noir, Blanc, Gris, and Hairy (not quite an in-joke but an alternative name for the Lladoner Pellut) – is prevalent and for many they represent the flagship of the region. Unexpected for me was a significant amount of white varieties in the vineyards, and we tasted many really attractive and well-made white wines on our travels. We made a most interesting visit to the research station at Tresserre. Here they conduct various vineyard trials, one being the selection of more robust clones of Syrah, another the suitability of experimental drought and disease-resistant varieties for the region. These latter trials proceed to micro-vinifications, and we tasted a small selection of the outcome of these experiments including a worthwhile Assyrtiko. Elsewhere in the vineyards, this region is no.1 in France for organic and biodynamic viticulture. The cost of production in the region is high. Old vines have reduced and variable yields. The total yield for AOP wines in the Roussillon is ~30 hl/ha which is about half the national average. Mechanisation is relatively limited, with many small vineyards, bush-trained vines, and rocky sloping plots. This high production cost implies the need to focus on quality wines which can command an appropriate price to achieve a business return.

The most historic wines of the region are the fortified Vins Doux Naturels (VDN), which come in a surprisingly wide variety of shades and styles. Eric’s masterclass on this subject was an illuminating disquisition. However, sales of these wines have been in long-term decline, which is a commercial challenge; they now represent around 25% of the total production. The more oxidised styles provide a point of difference with many other fortified wines, and they can offer great character and interest – let’s hear it for Maury and Banyuls Rancio. The unfortified/dry wines comprised the major part of our tastings, and we found a superb range of characterful examples. Many of the best red wines are based on old-vine Grenache and Carignan, with Mourvedre and Syrah also featuring widely. They are seldom lightweights either, often pushing or exceeding 15% vol. The variety and quality of the white wines was impressive, and for me unexpected, with many really attractive examples. The appellation system was, as ever, a topic of discussion. Whilst most producers work within the AOP (principally Côtes du Roussillon/Villages for the dry wines), some reputable producers shun the AOP system – a challenge for the Roussillon brand. We tasted a fair number of IGP wines (principally Côtes Catalanes) and Vins de France, and many of these non-AOP wines were excellent. International recognition of the Roussillon region and its wines is limited, and the region is grappling with how best to project itself in export markets. Nevertheless, there was a real sense of dynamism in the region. Incoming growers and winemakers bring new ideas, and many of the traditional producers also displayed a real interest in creating new wines for new markets. There were also the one-offs – who could forget Monsieur Puig at the Aspres walk-round tasting and his Domaine Puig-Parahy 2002 vintage white wine, a captivating idiosyncrasy.

This was an outstanding visit. Eric is a knowledgeable ambassador for Roussillon, he and his team do a magnificent job for the CIVR. From the Institute, Justin put in a huge amount of effort in the organisation of the trip together with the events team in the office. Sincere and fulsome thanks go to one and all. The trip was greatly enjoyed and appreciated by all of us, it set a very high standard. I would warmly encourage anyone to visit or re-visit this wonderful region.

Any member who wishes to receive material distributed to those on the trip or any further information about the Roussillon wines tasted, please contact Belinda Eaton, IMW Events Officer. See also, www.vinsduroussillon.com.