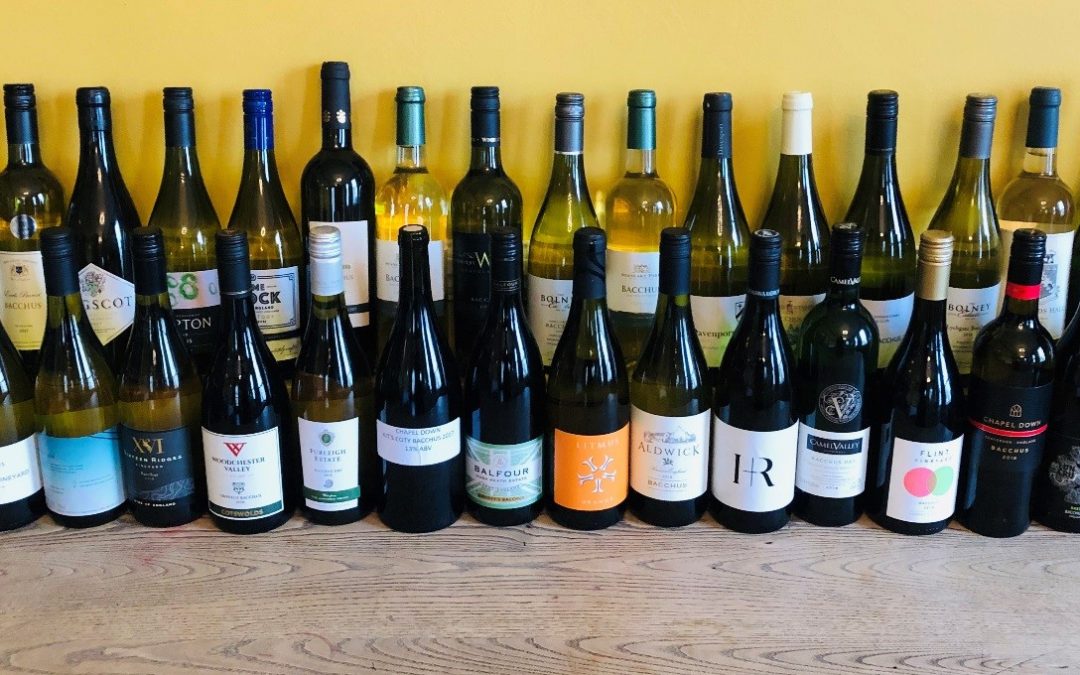 In the run-up to this tasting, some posts on social media made it clear that the Bacchus grape is divisive. On the basis of the tasting itself, a clear conclusion can be drawn……….even experienced tasters find it hard to agree on exactly how wines made from Bacchus should taste. However, all tasters found wines that they scored highly and would agree, I believe, with the quote from one taster that “Bacchus has the potential to make quality wines in a diverse range of styles”.

Ironically, two of the top four preferred wines were those that were the most obviously oaked. These were the Chapel Down Kit’s Coty 2017 and the Hoffman & Rathbone HR 2018.  However, it was also acknowledged that both of these were beautifully balanced and excellent examples of the style.  Maybe it is an indication of the uncertainty surrounding Bacchus that tasters were inclined to favour the more familiar characteristics of oak ageing.

One taster summed it up nicely, looking for “florality, fruit and acidity”. And these were indeed the qualities found in the majority of the preferred wines.

Residual sugar
Residual sugar was arguably the most divisive topic of the tasting. Looking at the scores, it is hard to argue that tasters favoured either the drier or the less dry wines. However, a number of tasters commented that some producers still fail to find the right level of RS. As ever with wines with high acidity, the perception of sweetness is complex. Overall, the highest-scoring wines were not bone dry and had residual sugar of between 2 and 4 g/l.

One taster sensibly pointed out that the level of RS favoured by a producer may well depend on their target market. For instance, the producer whose entry had the highest level of RS (Sharpham Estate 2017) also has an outstanding Cellar Door operation – and it is no secret that the wines that sell most easily at Cellar Door are often those that are….er….less dry.

Oak
As mentioned above, the two clearly oaked wines scored highly.  Certainly one can conclude that, in the hands of experienced winemakers, Bacchus responds well to oak ageing.

Blends
Nearly all the wines presented were made 100% from Bacchus grapes. However, two of the more popular wines were blended with a small percentage of Reichensteiner – the Hoffman & Rathbone with 20% and the Bolney Lychgate 2018 with 10%. Both the Aldi 2018 from Lyme Bay and the Davenport Vineyards Horsmonden Dry 2018 featured less than 50% Bacchus in the blend (though it was still the majority grape), with the balance made up by several other grapes – and both scored well.

Winemaking
The words “reduction” and “sulphides” came up a lot. And not normally in a positive way.  The winemakers present were especially critical of the sulphur levels in some of the wines, on the basis that it stifled the naturally floral aromatics of the Bacchus grape.

The one orange wine in the tasting – the Litmus 2016 – was well received by most tasters. The one sparkling wine, the 2016 from Denbies, met with mixed reactions.

Vintages
Most of the wines featured were from the 2018 vintage and 8 of the 10 favourite wines came from 2018. It is early days but the least one can say is that it is a vintage that gave the grapes and winemakers every opportunity to produce fresh, aromatic Bacchus wines.

The one older wine in the tasting, the Chapel Down Reserve 2011, scored well and suggested to most tasters that Bacchus has ageing potential.

Origin
One of the hopes in advance of the tasting was that it might go some way to helping us identify stylistic differences between the counties. Given the inconsistency of feedback and scores noted above and also the fact that several wines were a blend of counties, it is not surprising that there were no clear conclusions in this regard.

Origin
One of the hopes in advance of the tasting was that it might go some way to helping us identify stylistic differences between the counties. Given the inconsistency of feedback and scores noted above and also the fact that several wines were a blend of counties, it is not surprising that there were no clear conclusions in this regard.

Conclusion
It is hard to reach clear conclusions from such a diverse mix of scores and feedback.  Bacchus clearly has many admirers but it seems that it is not a grape that appeals to all. The key positive is that all tasters found wines that they very much liked. As well as the floral, Sauvignon-like attributes mentioned above, several tasters mentioned similarities to Chablis on certain wines, a natural raciness and stony minerality that complement its bright fruit flavours perfectly. The naturally low alcohol of the wines (typically around 12%) also seems very much in tune with current trends.

Is Bacchus Britain’s great white hope? This selection showed strong promise but there are a number of other British whites starting to come through; certainly, given the quality of some Chardonnay and even white Pinot Noir that we are beginning to see from England, Bacchus will have healthy competition for the still wine crown. Hopefully readers will find the top 10 scoring wines themselves so that they can reach their own conclusions. These were the following:

Many thanks to all the producers who submitted wines for the tasting, probably the most comprehensive range of Bacchus wines yet assembled. There were 36 wines in all and these were tasted by over 40 tasters, a mix of wine press, producers, merchants and educators. The wines were offered for tasting both blind and open.