A new model for terroir? 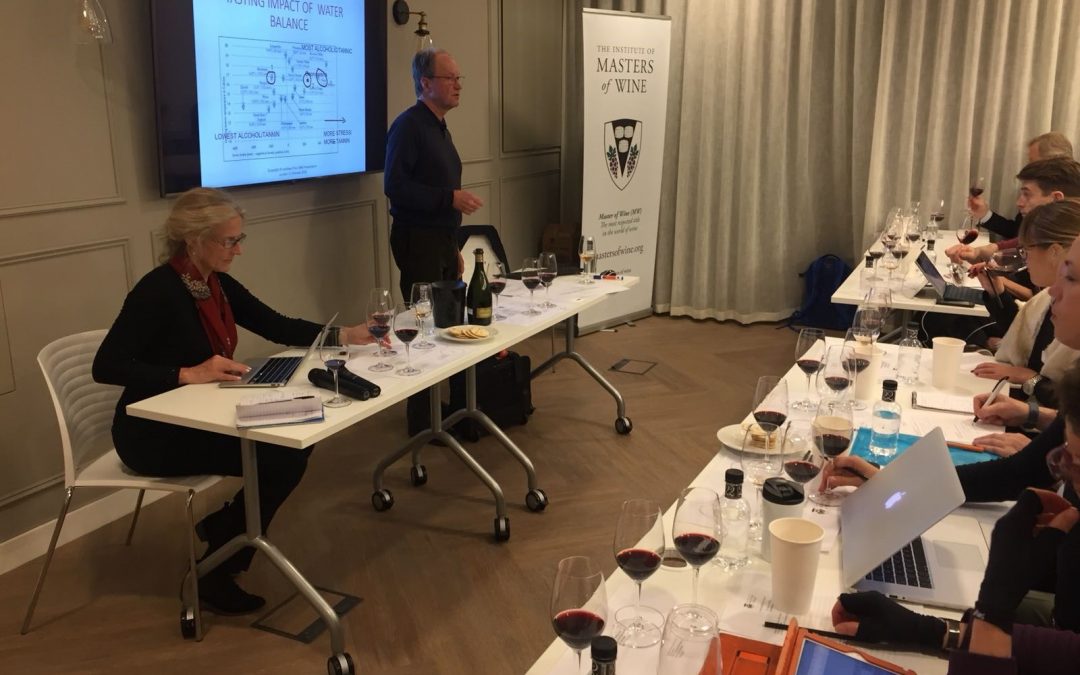 Climate, slope, aspect, elevation, temperature… the list of variables in the complicated ecosystem that is ‘Terroir’ is exceptionally long and poorly understood. Nowhere do we have a truly satisfactory mechanism that explains the world’s diversity of wine styles.

Or do we? Enter Dr Andrew Pirie. This early pioneer of the Australian cool climate wine industry with a PhD in viticulture, believes that terroir relates more to ‘the water balance of a vine, where humidity, evapotranspiration and soil drainage interplay to sculpt the wine character of a region’. In the most interesting and provocative masterclass he gave at Riverside Quay on October 15th 2018, he laid out his arguments. He also introduced his Terroir model and led us through a structured tasting of wines that had been especially tested and analysed for this event.

He began by dismissing two widely held summary statements about terroir: “The traditional model of Terroir links it broadly to temperature and degree days but while temperature clearly influences ripening it changes too much year on year to be a sensitive measure of Terroir. It leaves us with the conundrum of why wines from cool regions in warm years do not taste the same as wines in warm regions from cool years’. The second statement that ‘calcium and minerals in a soil influence the style of wine’ he dispelled even more succinctly by arguing, “if quality could be achieved simply by adding minerals you’d have Grand Cru fertiliser!”

With those two arguments kicked into the long grass Dr Pirie settled down to address the question: so what is it that really defines the terroir of a region?

For Dr Pirie it is vine water balance and he credits Professor Gerard Seguin for opening his eyes. His breakthrough moment, he says, came when he read Seguin’s PhD paper (Pirie claims to keep a copy of his PhD under his bed! ) written in 1975. Using a moisture probe, Seguin collected data in the Medoc that showed the slight variations in the regular but moderate water supply to vines strongly define the great soils of top cru classés. It was a very new way of thinking and took great courage to go against the traditionally held concepts of terroir at the time, but it started Dr Pirie on the path to his own PhD, examining the vineyards in Tasmania.

Dr Pirie has long experience as a viticultural consultant; he also developed the successful pioneering Pirie Estate and, more recently, established his own private Apogée Vineyards, All his decisions (and results which would appear to endorse the benefits) have been based on his belief that, simply put, it is vine water balance that affects the flavour profile of grapes. The balance is naturally influenced by the interplay of available water in the soil and in the aerial environment. Most importantly it can be measured (in units of pressure) and is sensitive enough to determine the difference between two parcels of vines side by side in a village in Burgundy or the Mosel.

According to Dr Pirie the vine water balance influences the degree of vine stress and seems to give a fingerprint to the vineyard. The consistent feature of quality vineyards is that the water balance appears constrained but not to the point of hindering photosynthesis. A little bit of stress creates abscisic acid and this slows down shoot growth and transmits a message to the vine to stop growing and start producing. In this stage, abscisic acid and sugar are a very powerful combination and they trigger grape ripening. Together, they turn on a mechanism that acts like a hormone and they can influence colour, tannin and intensity of flavours in grapes. The best colour, aromas and flavours will be developed where vines are in what Dr Pirie called ‘the Purple Zone’ and are subject to the optimum level of stress, maintaining mid-water balance for long periods after veraison.

So, if the character of a terroir is determined by the potential vine water balance that a site provides, what are the precise factors that govern that balance?

By examining these three factors Dr Pirie believes a quantifiable mechanism can be devised that is sufficiently sensitive to environment – both soil and aerial – to explain terroir. He demonstrated his argument in a Climogram and via graphs of data and three wines plus the excellent NV Apogée Rose. These were three Cabernet-based red wines : the 2014 Ch Fotesteau from Cissac, Haut Medoc; the 2013 Raidi Billy Cabernet Sauvignon, Coonawarra, and the 2013 Grgich Hill Estate, Rutherford, California. These all proved his points in a most satisfyingly tidy fashion (although there was a tangible sense of relief emanating from the open-minded scientist).

Dr Pirie summarised what he felt the next steps needed to include (- and along the way he provided ample subjects for potential Research Papers). Naturally, “more research is required” but the vine water balance mechanism could/will have profound implications. Not only will we need a more accurate assessment of the distribution of quality vineyards, we will also need to reclassify viticultural regions into Humid and Dry as well as the more traditional Cool and arm. And when it comes to the siting of new vineyards we will need to assess the evaporative demand and calculate the amount of irrigation necessary to create the optimum stress levels within them. Although it has to be said that, in the face of climate change and water shortages, this may be easier said than achieved. Ultimately however, with this mechanism it should be possible to determine not only the qualitative potential of the wine but the actual style as well.

The IMW is extremely grateful to Dr Pirie for his extraordinary generosity in coming to speak to members, students and guests. Also to David Courtney-Clack, UK importer of Apogée.