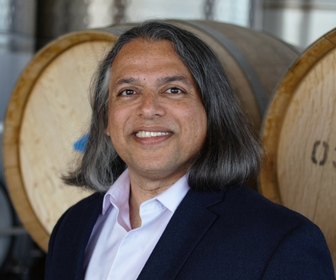 Based in United States

Yashodhan Naravane ('Billo') is the owner and winemaker of Rasa Vineyards, an artisanal, world-class winery that he founded with his brother in Walla Walla, WA. He attended UC Davis and earned an MS in Viticulture and Enology in 2008. In addition to his duties at Rasa Vineyards, he loves to help other serious wine aficionados realise their artistic visions for their wines and grapes. He provides consulting winemaking and viticulture services for the following clients: Delmas, Rivaura, Echo Ridge Cellars, Mackey Vineyards, and Sinclair Estate Vineyards. Billo also loves to teach and is an Adjunct Professor at Washington State University. Prior to making the transition to the wine industry, Billo studied Mathematics and Computer Science at the Massachusetts Institute of Technology and Electrical Engineering at Stanford University. He also worked as a consultant and manager at several technology companies including Oracle, Netscape, and Hewlett Packard. He is incredibly thankful that he hasn't written a line of code in approximately 10 years. When he is not making wine, teaching about wine, or drinking wine, he can often be found tinkering on the piano or, much to the chagrin of his wife, reading theoretical mathematics texts. Actually, he is just as likely to be learning magic tricks or reading Spiderman comic books. But his favourite activity is spoiling his darling baby granddaughter.