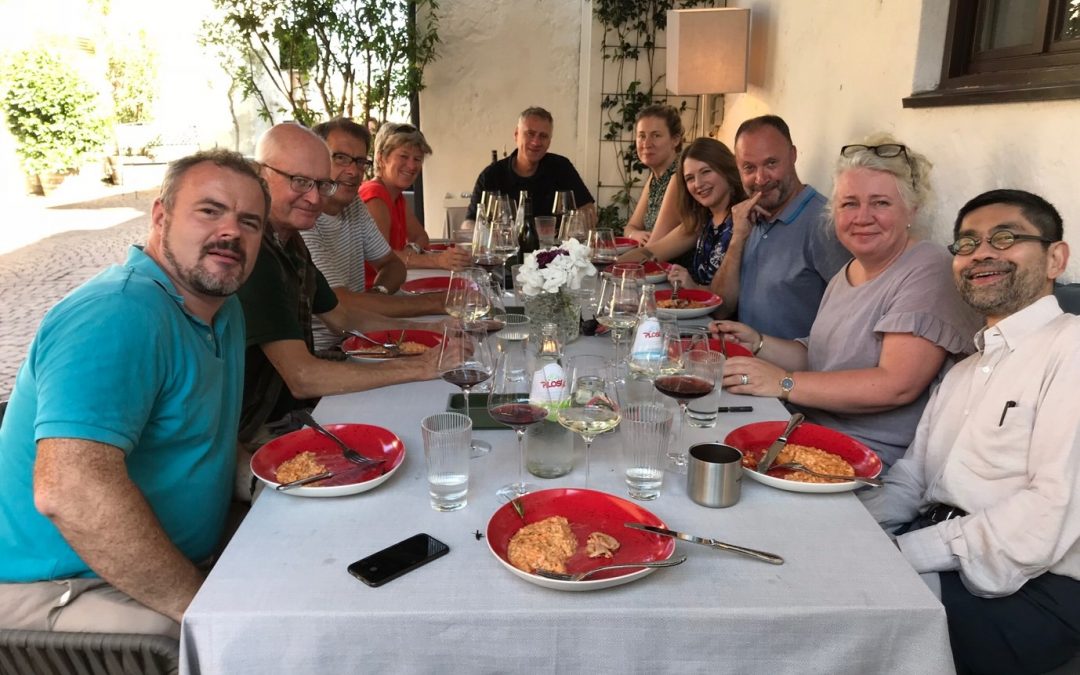 A diverse group of ten Masters of Wine from Australia, England, New Zealand and Singapore went on the annual Alto-Adige trip hosted by the Consorzio Vini Alto Adige between 6 and 8 September 2018. Notably each year’s trip has a different focus on a style of wine or particular sub-regions of the region. This year’s focused largely on the northern parts of the region with visits to Val d’Isarco, Val d’Adige, Val Venosta as well as Appiano and Bolzano.

The visit began with a welcome dinner at Restaurant Zuo Kaiserkron hosted by Eduard Bernhart, Director of the Consorzio Vini Alto Adige in the presence of representatives from Cantina Di Bolzano and Cantina Muri-Gries . Preceding the dinner was a very special tasting presented by the association Tirolensis Ars Vini where an extensive range of rare and aged wines of a number of wine estates with wines from 2012 going back through the ‘90s to a 1985 Riesling.The following day began with a visit to Falkenstein at Naturno in the Val Venosta. The very down to earth and thoughtful owner and winemaker, Frank Pratzner, presented his range of his wines – Pinot Bianco, Sauvignon Blanc, Riesling and Pinot Noir, in each case showing a pair, the current vintage on release compared with an aged bottle that the estate keeps in reserve for later release. Fascinating and proving their aging potential.

Moving back towards Bolzano, the group had lunch at Restaurant Mill near Merano followed by a (all to short!) walk round the Kranzelhof Gardens. After the charms of the post-prandial garden ramble came the modernity of Cantina Merano with some distinctly futuristic lighting in one of their barrel cellars. Although a range of wines were shown, the tasting concentrated on Pinot Bianco from the Tirolo vineyard starting with younger vintages and ending with a trio of Pinot Bianco Riserva from the vintages 2012, 2011 and 2010.

The next stop was Weingut Kornell des Florian Brigl. The vigourously enthusiastic Florian took the group on a tour of the winery that included the sighting of an ancient wine press which luckily no one was called upon to operate. He then gave a tour of his uniquely named wines such as Cosmas for his Sauvignon Blanc, Damian for Gerwurztraminer, Erich for Pinot Blanc and so on.

The journey continued with dinner at the restaurant Braunbach where a group of sparkling wine producers showed a refreshing variety of sparkling wines which included those made with conventional grapes such as Pinot Bianco, Pinot Nero and Chardonnay as well as an exotic blend containing Assyrtiko. All of which were delicious with a spread of cold cuts and salads.

The final day of the trip kicked off with a short journey to the edges of Bolzano to visit the farmhouse and winery of Weingut Hans Rottensteiner where Hannes Rottensteiner guided the group through his vineyards ending with a lovely alfresco tasting of classic Alto-Adige wines – Pinot Bianco, Gerwurztraminer, Lagrein, Schiaparelli Nobile, Santa Magdalener and a Passito.

The party moved on to Appiano for a tasting of Cantina St-Michael-Eppan by Hans Terzer. Hans started the tasting gently with some site specific Pinot Bianco before moving on to a an impressive vertical of the Cantina’s top white wine, Appius.

Al fresco was clearly the order of the day with beautifully sunny and warm weather making lunch at Restaurant Pillhof a delightful affair with scrumptious food accompanied by wines from St Paul’s and Tiefenbrunner. The group then moved on up into the Val d’Isarco. Armin Gratl, Managing Director of Cantina Valle Isarco, greeted us warmly for a tour of the winery before settling down to a tasting of varied wines including some grape varieties that had not yet been tasted on the trip – Sylvaner, Kerner and Gruner Veltliner.

The day’s tour finished on a high note climbing up the Alpi Suisi to an alpine hut dinner at Gostner Schwiage 1,900 meters above sea level. Noticeably cooler at this altitude, the weather was kind to taking photographs and simply absorbing the breathtakingly peaceful beauty of green pastures surrounded by mountain peaks punctuated by the odd cowbell. The final night’s revelry was hosted by the President of the Consorzio Vinci Alto Adige and included wines from Abbazia Di Navacella, Cantina Tramin and Cantina Katerina paired with the chef’s fresh cuisine.

As always, the trip was impeccably organised with much warm hospitality and generosity shown by the Consorzio, IDM and all the producers who took valuable time from the harvest to host the group. A lovely experience that was very gratefully appreciated by all the visiting MWs.